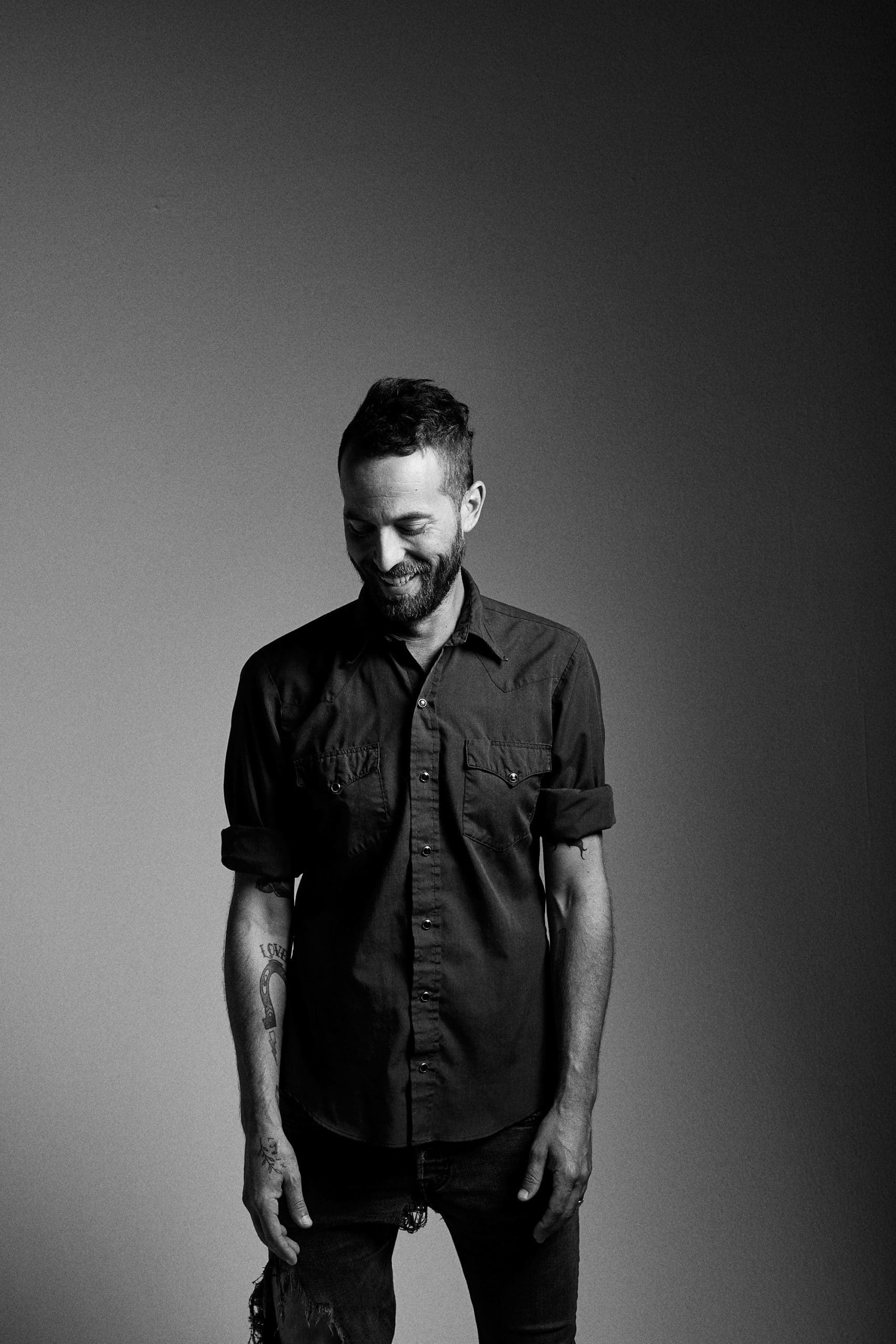 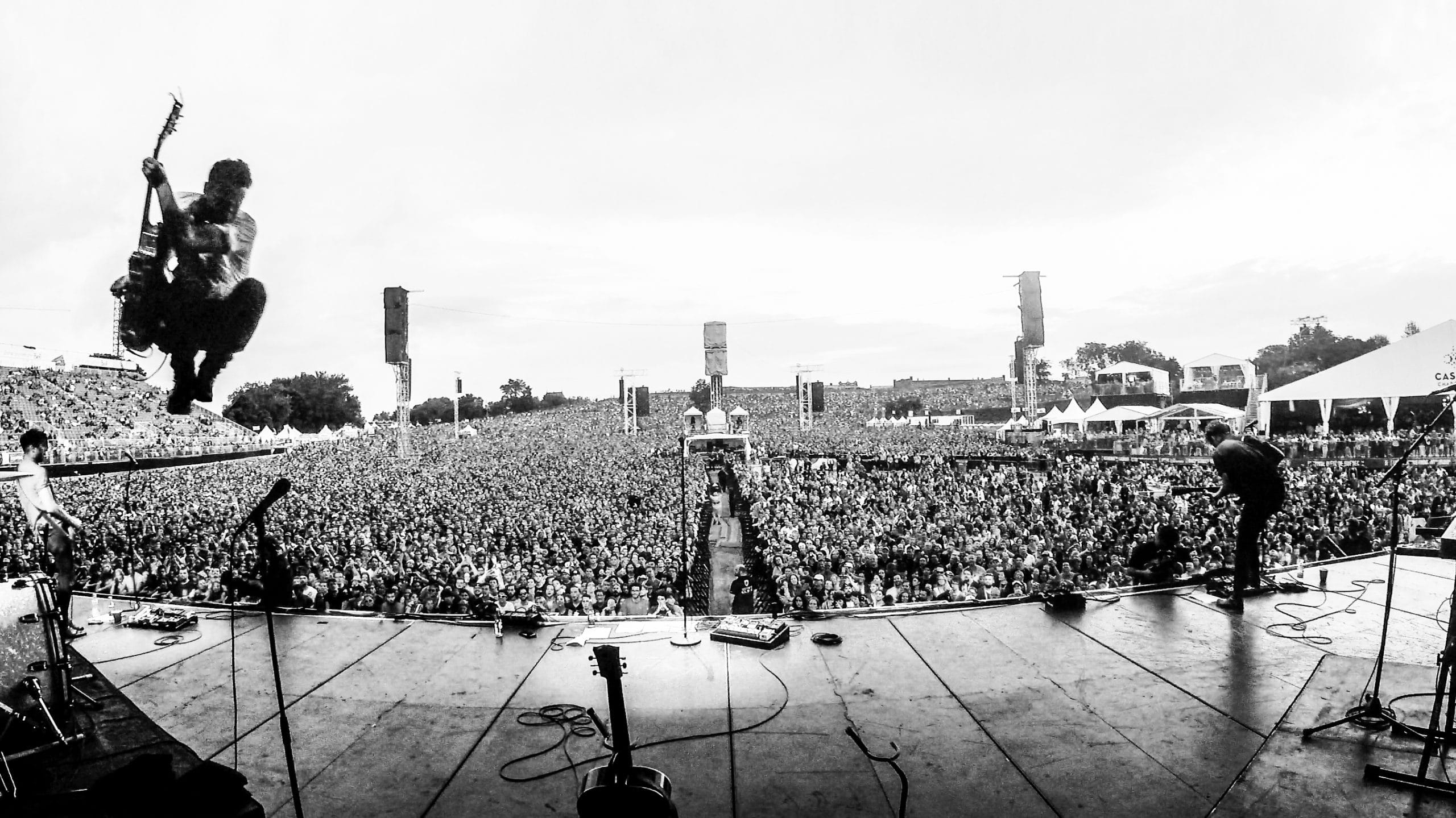 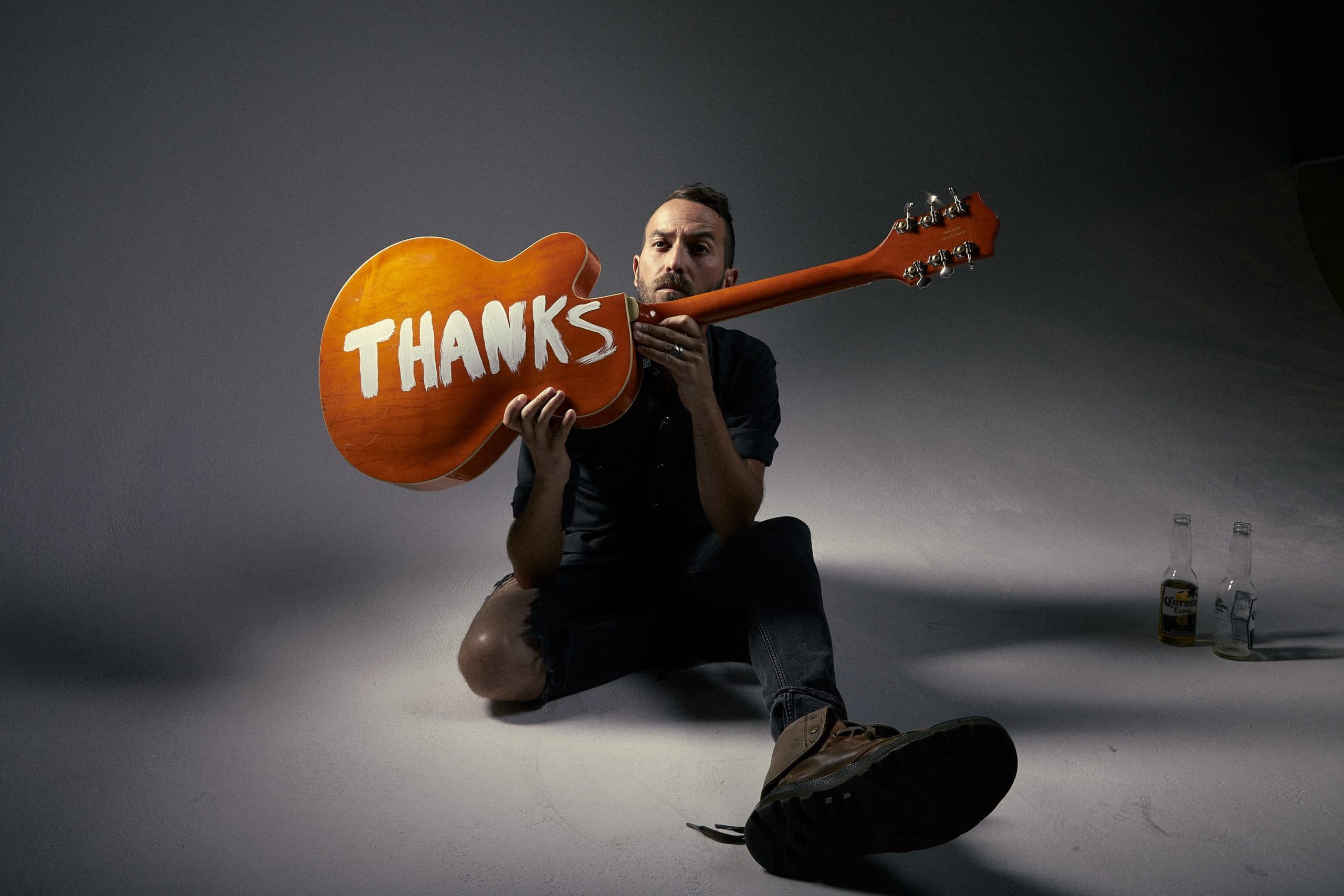 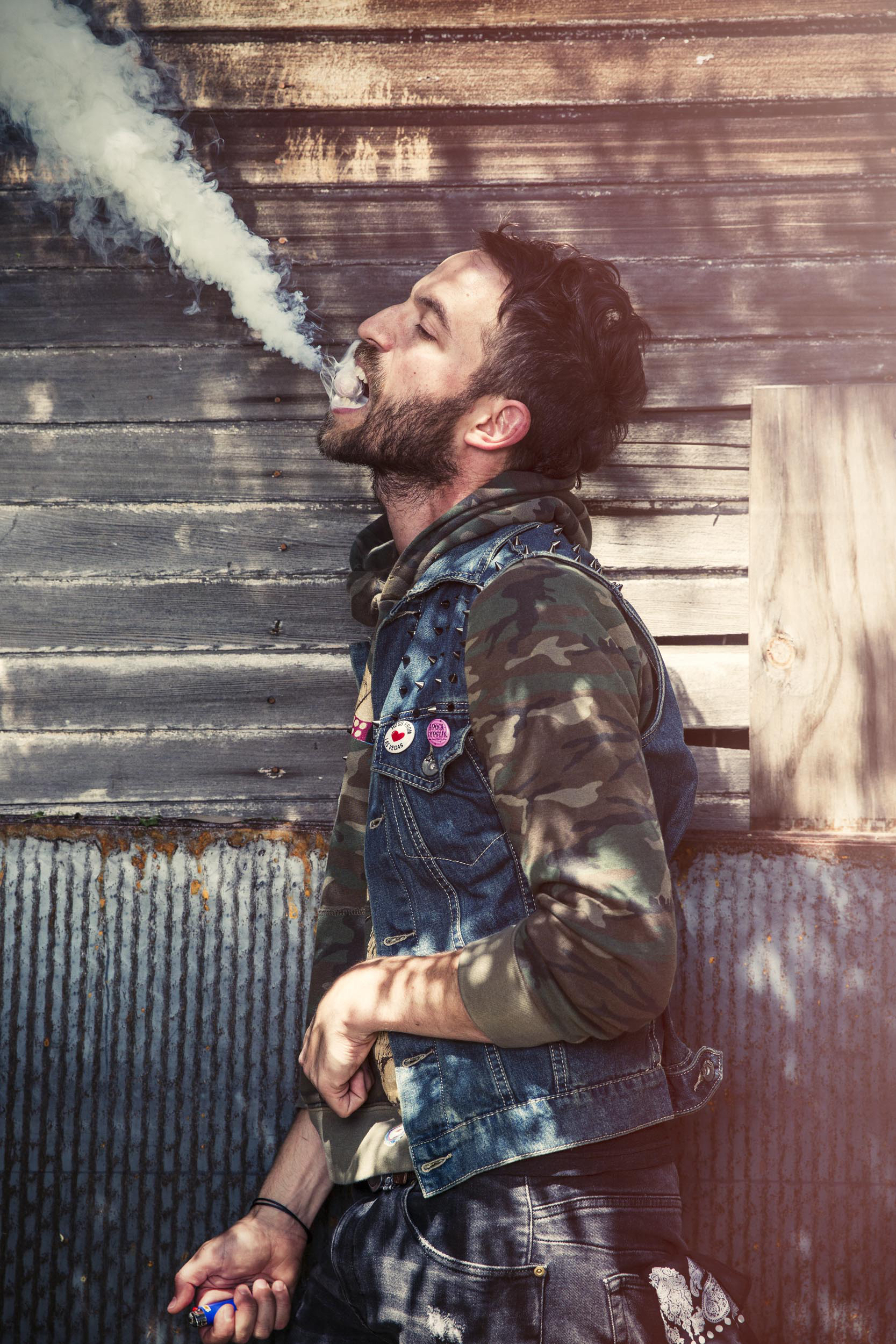 Mondo Cozmo is Josh Ostrander, an unabashed patriot who appeals equally to the blue and red states, Ostrander writes about the American experience as only he can, the guy everybody wants to share a beer with because he’s genuine, a real guy, not some narcissistic rock star towering above his audience, but on their level.  This is the soundtrack for a new America, one united under the stars and stripes, a statement of unification.

“I’m humbled by that statement,” says Josh. “I just keep trying to reach people with love, hugging them and talking to them about rock ‘n’ roll. At the end of the day, my job is to show you love through my art by treating everybody – right or left – with equal respect.”.

New Medicine the new album by Mondo Cozmo and his first for eOne’s Last Gang Records, represents a fresh start, a new beginning and the result of 10,000 hours performing and recording in his 20 years as a professional musician. This refreshing blast of buzzsaw guitars and wall-of-sound production that evokes everyone from the Velvet Underground-meets-David Bowie in the torn-from-today’s headlines rant of  “Black Cadillac,” to the R&B nod to the nod to Main Ingredient’s “Everybody Plays the Fool” in “Upside Down,” a song written before the pandemic but prescient in its depiction of a world in turmoil.

“Come On” is a stone anthem – co-written with Dan Wilson (of Dixie Chicks and Adele renown) in the tradition of Mondo Cozmo’s #1 Triple A smash, “Shine,” while the Dylanesque “Generator,” which offers a powerful “come release me” chorus, echoes the album cover, a note-perfect homage to Bob’s “Freewheelin’” album.  With Black Rebel Motorcycle Club guitarist Peter Hayes sitting in – along with his bandmate, drummer Leah Shapiro on a handful of tracks – Mondo Cozmo (a name derived from his dog and John Waters’ classic Mondo Trasho) recorded most of the tracks in his home L.A. studio, adding percussion at Palomino in nearby Boyle Heights.  In addition, Mondo Cozmo fan, producer Butch Vig, who took to Twitter to rave about “Hold on to Me,” a song from Mondo Cozmo’s previous album, served as a sounding board.

The impetus for New Medicine, a prescient title decided on before the current coronavirus pandemic came from an unlikely event that could have been catastrophic. After a grueling 10 months on the road and having played just the night before across the country in Montauk for a private event, Ostrander finally lost his cool in the middle of a video shoot in Culver City.

“Things just got out of hand,” he recalls. “Just a total shit show. I had to do the same song over and over and I just cracked. I was exhausted, emotionally and spiritually, and I just lost it.  I punched what I thought was a Styrofoam wall that turned out to be a glass door, and I complexly ripped up my hand.”

Rushed to the hospital – the incident is recalled on the new track, “It Fills the Room” – Ostrander could barely strum his guitar (he had to tape a pick to the cast to do so), but after a prescription for antibiotics, the New Medicine songs began to flow – “Come On,” “Black Cadillac,” “Generator” and “Upside Down,” which he posted to YouTube in anticipation of the rest of the album. By this time, Mondo Cozmo had been signed to Last Gang Records by Sean Stevenson, the brother of Universal Republic’s Rob Stevenson, the noted A&R executive and label head who first signed Laguardia back in the early 2000s.

“I’m pretty proud of this album,” says Josh.  “Especially the lyrics.  There are a couple of lines I have no idea where they came from.”

“Black Cadillac” recalls “Sympathy for the Devil,” as Mondo places himself inside the limo as part of Jackie Kennedy’s dress before JFK gets assassinated, while “Upside Down” offers a hip-hop beat reminiscent of Beck. Like the previous Mondo Cozmo album, 2017’s Plastic Soul, this collection of songs transcends category, with rock, hip-hop, R&B and plenty of hook-filled pop choruses that wouldn’t sound out of place on any number of radio formats.

“It’s just great to be on a label where I send in the songs and they thank me,” says Ostrander. “Rather than, ‘Can you change the beat on this?’”

With the current pandemic affecting life all around him, Josh feels practically guilty about how New Medicine speaks to the current moment. “I almost feel like this coronavirus was my fault the way some of the songs anticipated it.”

New Medicine offers an antidote to what ails this polarized country, a prescription for musical eclecticism and the spirit of rock ‘n’ roll to see us through.

“What I love about Mondo is how it pulls from so much different music,” says Josh. “I try to make music I’d love to listen to.

“I’ll be Mondo for the rest of my life and I’m pretty psyched about it This album switches genres alla over the place.  I’m proud of both Mondo records.”

For now, Josh is waiting out the quarantine, “halfway through writing the next record,” explain, “I think the best thing we can do now is get these songs into people’s hearts, and when it comes time to get out there, we’ll play them.”

Mondo Cozmo’s New Medicine proves the cure is stronger than any disease. 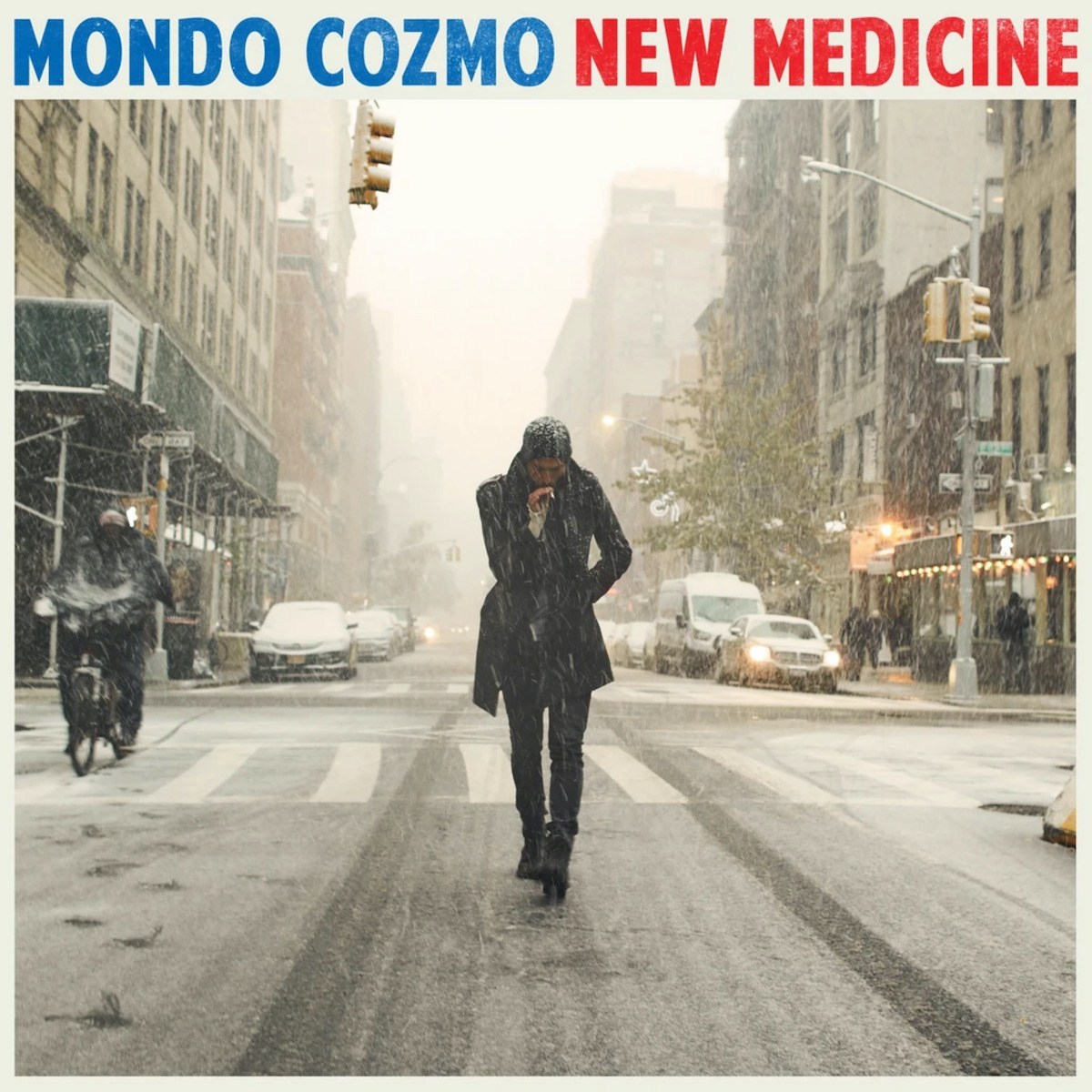 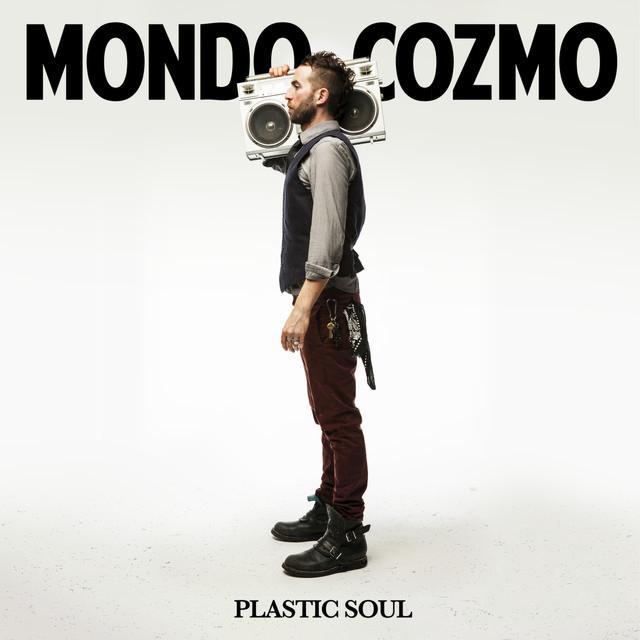 MondoCozmoVEVO
We use cookies on our website to give you the most relevant experience by remembering your preferences and repeat visits. By clicking “Accept”, you consent to the use of ALL the cookies.
Cookie settingsACCEPT
Manage consent