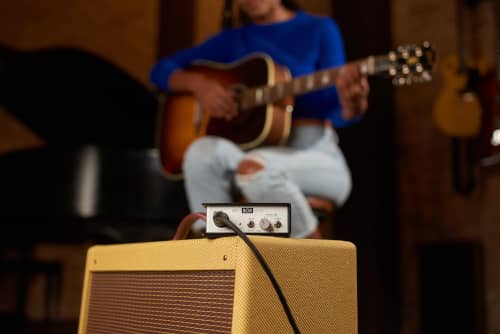 I imagine many folks may have seen a DI box or direct input box in the past and thought “what do people use those things for”? Read on to find out whether or not you need one, and what the best DI boxes need to be able to do!

So let’s get the whole naming thing out of the way first: the “DI” in “DI box” stands for “direct input” or “direct injection” depending on who you talk to. The naming convention comes from a time decades ago when very little studio gear was made with instrument inputs, so if you wanted to record a bass guitar without micing up a bass amp, you needed to “go direct” and somehow get that bass directly connected to the input of a microphone preamp. The problem is that microphone preamps use an XLR input connector and have a different input impedance, so the unbalanced signal coming from the bass guitar must be converted before being sent to the microphone preamp’s input.

And that is the first and primary job of a direct box – to convert the unbalanced high impedance signals from sources like bass guitars, acoustic-electric guitars, mandolin pickups, fiddles, or keyboards into balanced low impedance signals that can be properly transmitted via XLR or “mic” cables. It’s actually not easy to convert unbalanced signals to balanced signals without changing the tone of the audio in some way, and that’s why the circuit design is so important to get right, and why prices of DI’s can vary widely.

Once the DI box has done its magic, the signal can travel much longer distances before it begins to degrade, which is especially important on large live stages because the Front-Of-House mixing console can be far away from the stage (100+ feet is not unusual). Live sound setups usually employ a number of direct boxes to get those important unbalanced signals all the way to the FOH position safely, because an unbalanced signal coming directly out of a keyboard would not fare well at all if it traveled that distance normally.

That’s why a DI is so important when playing live – to protect the integrity of your instrument’s signal, and make sure that it sounds the way it’s supposed to when it’s amplified – as well as shielding the signal from induced noise as it travels along the XLR cable.

Even though recording interfaces and microphone preamps often sport instrument inputs these days, direct boxes can enable some creative options when tracking in the studio too, not just when playing live:

Driving unbalanced and balanced outputs from the same source at the same time.

This kind of scenario is often used when recording bass guitar, to allow both the micing of a bass amp and direct recording at the same time. In this scenario, the output from the bass goes into the input of the direct box, which is then is connected to both a bass amplifier (which is mic’d up and sent to track 1 on your recording device) and a mic preamp via the DI box’s balanced output (which is recorded on track 2 of your recording device). It’s a great way to fatten up bass sounds because you get the clean and clear direct sound for definition, and the mic’d amplifier sound for girth, and you can decide what the ratio of the two should be at mixdown. Even better, if the DI box has a phase/polarity switch (and Warm’s direct boxes do), you can experiment with the difference between the two settings, and if your experience ends up being similar to mine you’ll probably find that there isn’t an ideal setting – it just depends on what you’re looking for, and both positions will sound good.

You can also use a variation of this technique when recording an acoustic guitar that has a pickup installed, by micing the guitar normally and recording that to a track, and then running the output of the guitar’s pickup to a DI and then to a mic preamp. Many acoustic guitar players who are known for getting killer acoustic guitar sounds on record (I’m thinking of guys like Michael Hedges and David Wilcox) use a technique like this, because the pickup can really help detuned low strings sound immediate and powerful, and the microphone provides the necessary air and space around the notes.

Even though all of the sound that someone hears in this scenario comes from software inside your DAW (whether the sounds come from Amplitube, Bias, Eleven, Helix Native, Guitar Rig, Neural, STL, Softube, Scuffham, etc), you still need to get the output of your electric guitar into your computer. As mentioned previously, many interfaces have direct inputs on them these days, but the quality can vary widely! For instance, check out this video where the reviewer compares the DI on his interface to the Active DI from Warm Audio, as an example of how different two similar devices can sound when they perform the same task. The Warm DI has a more natural-sounding midrange and extended high and low-frequency response compared to the DI onboard the interface.

There are a number of other scenarios that Direct Boxes can enable or help to achieve (reamping electric guitars, adding effects to guitar amps that don’t have effects loops, etc), but we don’t have the space here to cover them – we’ll make sure that we do in the future though!

We’ve talked about how important direct boxes can be in both live and studio situations, but it’s important to understand how difficult a challenge creating a really killer circuit is – you can’t just stick a simple transformer in a can and call it good! The new active and passive DIs from Warm Audio were designed to be best-in-class by our friend and partner in crime David Geren, the CEO of Cinemag Transformers, and they perform better than any other DIs that we’ve tested them against.

Seriously, during the testing phase we were continuously surprised at just how well our passive DIs stacked up against every other passive box that we tried, no matter the price. These Warm DIs retain all the high and low-frequency information that they’re given, and they don’t change the midrange response like so many others do – they’re that good! They can also accept the speaker input from guitar and bass amps and send it out the XLR connector, so they’re super versatile tools to have in your bag every time you record or play live.

I hope that helps clear up any confusion you might have about direct boxes. Until next time!